The Alchemist: A Defense

Yeah I read it as a young adult with no experience in life and thought it was profound and life-changing. Then I read it a couple of years later and realized just how terrible of a book it was. It is like the romantic comedy of philosophy.
It just oozes of misplaced expectations in life that are dangerous to a growing mind. In the same way that romantic comedies poisons [sic] the mind in what real relationships are like, The Alchemist poisons the mind in what a real well lived life is like.
-u/Homet 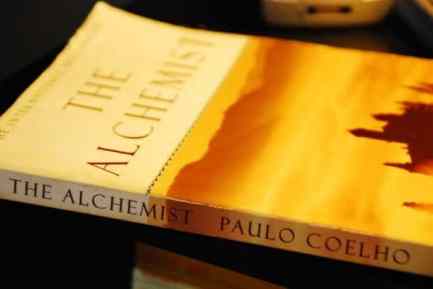 I like to read*. I’ve read a lot of great books as well as the Great Books. I’ll (mostly) humbly submit that I am an advanced reader. And also, seemingly contrary to all that, I read The Alchemist in 2015 and it changed my life.

Since then, I’ve run into a few people who loved it as much as I did. I’ve come across far more who had reactions like the ones I’ve grabbed from a particular Reddit thread (about something unrelated, as is the way of Reddit), but these comments could have been from any thread, any review, any armchair philosopher’s rant. I want to tell you why this book is one of my favorites, and why it has earned a spot on my shelf with Shakespeare and Buddha. If I think it’s so great, why is it so derided in the first place?
The book’s big flaw, I think, is that young (and some fully grown) adults read it thinking it is supposed to be some kind of philosophical tome. A twelve-year-old may be fully drawn in by the flowery tale and commit themselves to the incomplete life philosophy presented by The Alchemist. Later, when that twelve year old returns to it as an adult, they approach it as they remember it: as having deep philosophical truths, as a guide to living life to the fullest. But it doesn’t, it isn’t, and it’s not supposed to. The problem is people don’t see it for what it is. There’s another book that gives the reader no such trouble. Oh, The Places You’ll Go!’has more or less the same philosophy as The Alchemist:

You can get so confused that you’ll start in to race down long wiggled roads at a break-necking pace and grind on for miles across weirdish wild space, headed, I fear, toward a most useless place.
The Waiting Place…for people just waiting.
[…]
Waiting for the fish to bite or waiting for wind to fly a kite or waiting around for Friday night or waiting, perhaps, for their Uncle Jake or a pot to boil, or a Better Break or a string of pearls, or a pair of pants or a wig with curls, or Another Chance. Everyone is just waiting.
No! That’s not for you!
Somehow you’ll escape all that waiting and staying. You’ll find the bright places where Boom Bands are playing. With banner flip-flapping, once more you’ll ride high! Ready for anything under the sky. Ready because you’re that kind of a guy.

When we got that book for our eighth-grade graduation, we loved it. It’s inspiring to our adolescent selves, which is why Grandma bought it for us. A few of us might even have said it was our favorite book because of how roundly it struck us in our about-to-launch-into-high-school, significance-seeking preteen souls.
But it rhymes and it’s a little goofy. When we read it again at thirty four, we have no illusions that it was ever supposed to be taken as a serious academic text. By the time we’re fifteen, even, we know that we can’t take the good Doctor literally:

“And the magical things you can do with that ball will make you the winning-est winner of all. Fame! You’ll be famous as famous can be, with the whole wide world watching you win on TV.”

The reader will forgive the unevidenced assertion that this bit of encouragement is not meant to be taken literally. I’ve no doubt that someone has taken it at face value, but that person was probably one of those eighth graders. Is Suess’ idea “dangerous to a growing mind”? Does the above quote “poison[…] the mind in what a real well lived life is like”? Of course not.

I will also assert (again without evidence) that there are self-respecting adults who unironically say that ‘Oh, The Places You’ll Go!’ changed their life. But we don’t criticize them because everyone knows that Dr. Seuss was being purely metaphorical, that it was meant to be an inspiration to be daring, not an instruction book. Those like me who say the same thing about The Alchemist don’t get such a pass.

It’s utterly shocking just how many self-respecting adults unironically say reading that book changed their life. It’s like hearing someone say watching Thomas the Tank Engine led them to Nirvana and true inner peace. The Alchemist is just a cookie cutter, basic book of platitudes. Nothing good or bad, it is is [sic] what it is. That so many people seem to have had profound life changing earth shattering experiences reading it…it’s kind of bizarre.
-u/save_the_last_dance

Have you ever read any Thich Nhat Hanh? He says the same things over and over in different ways. Happiness is here and now. Be in the present. Joy about your surroundings is a feeling always available to you. I believe I just said the same thing three times.
Or what about this: did you like Toy Story? What if, instead of letting you watch Buzz and Woody overcome their differences, learn about their true selves, and come together to reach a common goal, a parent had handed your ten-year-old self a card that said “Believe in yourself and stay true to your friends”?

Apples and oranges, right? Books like, say, Crime and Punishment have a richness and complexity to them, a strong message, deep characters. My two examples (Thich Nhat Hanh and Toy Story) are a book of simple life principles and a fairy tale. They work on a totally different level than a truly great book does. I want to argue that it is exactly the confusing of apples for oranges that is stranding these critics in The Waiting Place, unable to be inspired by a simple but powerful truth because it is simple, because it comes with an uninspired plot and dressed in flowery prose.

Well, if you want a book that reveals big ideas on what it means to live a good life I’d start with Aristotle’s Ethics and Plato’s Republic and follow the philosophical conversation from there.
-u/linkin22luke

Knowing that you’re living the right life and knowing it are two different things. If you read The Republic, you can get a lot of knowledge. If you want to know something, read a fairy tale. Read a book dripping with colorful imagery, one that shamelessly pulls on your heartstrings. Read it at a time when its message is something you’ve had floating around in your head for a while but you couldn’t quite pull down into your basket. Read it, and then be inspired by it to read a book like ‘No Mud, No Lotus’ by Thich Nhat Hanh. Be inspired to follow that feeling to your dream, whatever crazy shape it takes**, but only after you’ve responsibly and non-magically saved up and gotten all your plans in order. Be inspired to ride that emotion all the way to the East, or the West, or wherever it takes you.

Books like The Alchemist stir something within that snaps us into the present and makes us realize that this is it, whatever the it is for you. Aristotle might change your life if it makes you realize you want to be a philosopher. That’s great for philosophers and academics. However, if you need a book that backhands you, (you probably won’t know it if you do), you need something like The Alchemist. The reason why so many people like it is because it does such a good job at backhanding. It won’t work for everyone, though. Maybe you’ll get that slap instead from a book like Wild by Cheryl Strayed, a memoir about her redemption on the Pacific Coast Trail. Or maybe it’ll be The Power of Now. Or even Eat, Pray, Love. But please, get it somewhere, I beg you.
I don’t think people should derive inspiration from basic, mediocre things. Their lives and their happiness and the human experience is worth more than that. Humanity is profound; and people need inspiration. Life is too short to be inspired by the fucking Alchemist, of all things. That’s my beef. It has a right to be popular. My issue is it has no right to be profound; it doesn’t deserve such love and adoration.
-u/save_the_last_dance
(this guy again, ugh)

Go out and get inspired by something basic, dammit. The story of finding yourself, the emotions that these authors cheaply tear out of you, these are the most basic tropes that there are. Who cares? Look, I’m going to go read Keats later, ok? Anything that inspires you is worthy of love.
Something else: I know most of the people who read The Alchemist, or something like it, are not going to make some big change in their lives. Some of them will say that it “changed their life,” but from the outside their lives will look pretty much the same. Still others will feel that slap but won’t follow through but for the fear that is described so accurately in these books. Remember the Waiting Place?
If someone feels like a book changed their life, even if you can’t see it, that’s still a really big deal. Your inner life is all you have: what if reading a silly little fairy tale can change your perspective? Maybe a “mediocre” fable will be what knocks the first stone down that hill where an avalanche aches to be set free. People are holding themselves back with their fears and the negative stories they are telling themselves about what is “right” and what is “correct.” Put that all down for just a couple of hours and read a stupid book. It could change your life.

* https://www.goodreads.com/user/show/29798634-john-kernan but I only started using it in earnest this past November 15th. I retroactively added a few of my favorites in there, too.

** That is, your personal legend (forgive me).

Before I leave you, here is some other nonsense from u/save_the_last_dance:

Why waste your time? Read good books, or don’t read at all. Reading isn’t necessary to a happy and fulfilling life. It’s horribly time consuming and nearly impossible to multi task with. It demands alot [ahem, sic] from you; so it should be time well spent. You can listen to bad music and still at least get your laundry and the dishes done. Even if it’s bad music, because of the other ways you spent your time, it’s not a net negative. Not true with bad or mediocre books. If you value your time; life is too short to read mediocre books.

Basic things can and should be popular. I’m bothered by the fact that something basic inspired people. […] It’s just a coffee table book, something you can get at the Dollar Tree for a dollar these days. That’s all it’s worth. I hate the idea that something like that ever actually changed someone’s life. People are worth so much more than that.